Adding up the fees: how does the U of A compare for tuition?

A national comparison of undergraduate tuition across the top Universities in Canada shows that Manitoba generally has the cheapest tuition fees, while Dalhousie tends to have the highest. The U of A tends to sit below average in tuition costs, frequently being the second lowest in the country in certain programs.

The Students Union’s Department of Research and Political Affairs underwent this work at the beginning of the academic year, and researchers' findings come with some caveats. To calculate these rates, researchers assumed a full 10 credit equivalent (5 full-time courses) per semester. Tuition was calculated separately from non-instructional fees, which tend to vary wildly by program, but are within a close range of each other across institutions, ranging from the mid $800s to around $1,200 at most schools (excluding McGill with higher fees in the $1,800s).

The schools selected for this cross-examination were Canada’s U15, a collection of Canada’s top research focused post-secondary institutions. This includes the University of Alberta, UBC, Calgary, Dalhousie, Laval, Manitoba, McGill, McMaster, Montreal, Ottawa, Queen’s, Saskatchewan, Toronto, and Western. While Waterloo is included in the U15 as well, they were omitted from the comparison because of research deadlines and a delay in their posting of their rates compared to other institutions. All numbers used data posted from each school for the Fall-Winter 2017 Academic year, excluding any spring or summer semesters. For the three Quebec institutions, their rates for students studying from the rest of Canada (ROC) were used.

Let’s look at the rates across the country by program. 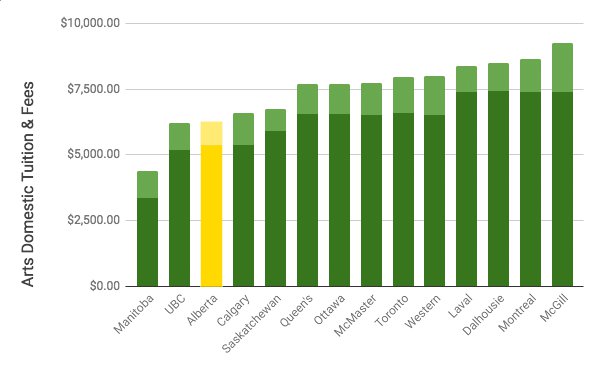 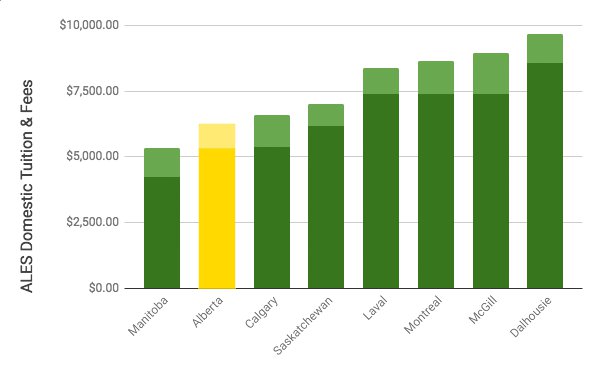 Tuition Rates for ALES (Agriculture, Life and Environmental Sciences) range from $4,245 at Manitoba to $8,592 at Dalhousie, with Alberta sitting pretty at $5,320, the second lowest. 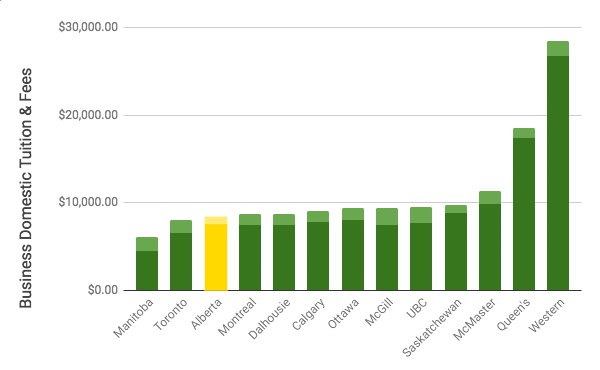 Here students can expect to pay a pretty penny, with rates capping out at $26,750 at Western, with Manitoba still maintaining the lowest price at $4,479. 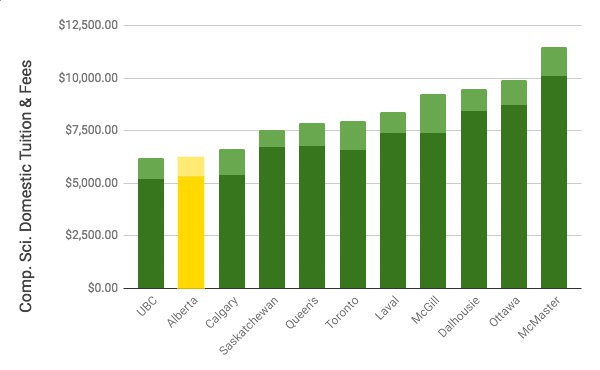 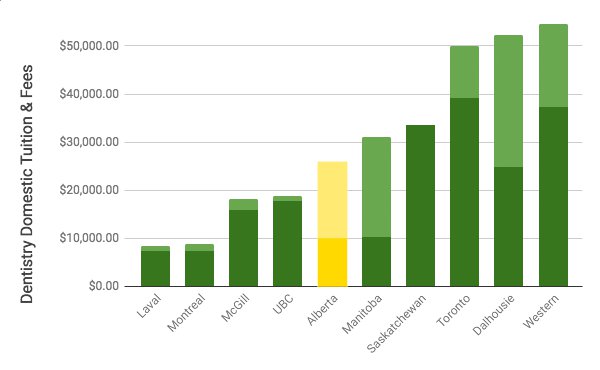 All professional faculties have significant disparities in cost, and many programs have additional fees that often outnumber tuition. For example, Alberta has an annual tuition of $9,866, but with annual fees of $15,943. Dalhousie takes the cake at by far the most expensive with a combined annual tuition and fees at $52,268 (holy!), while the cheapest comes in at $8,365 (Laval), over six times less than Dalhousie. 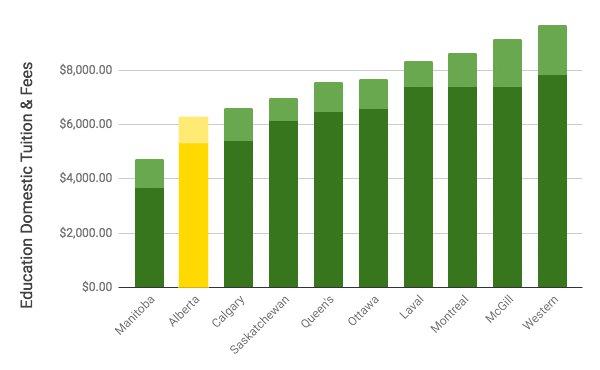 Education is across the board one of the cheaper programs, with Manitoba again coming in at the most affordable by far at $3,644, and the most expensive being Western at $7,844. Alberta is well below average at $5,320. 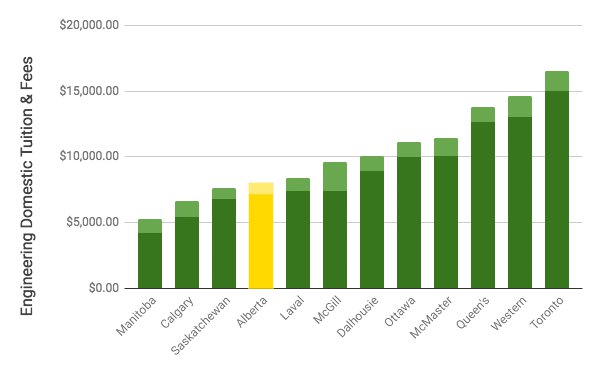 Being a more expensive undergraduate program, Engineers can expect to pay a pretty penny compared to students in other faculties across the country. The exception to this is at Calgary, where tuition for the program is in line with the school’s other programs at $5,385, and Manitoba at $4,224, only slightly more than many of their other programs. The most expensive in the country is Toronto at $15,010 per year, and Alberta sits below average at $7,094. 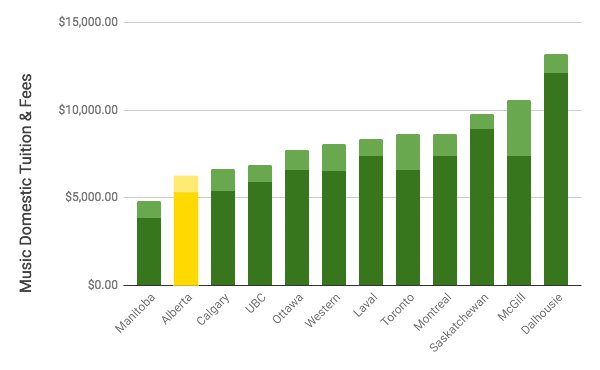 Students at Dalhousie are not singing happily at paying $12,103 per year in tuition, while Manitoba students may as well be on the cast of Glee, at $3,810 a year in tuition fees. Alberta holds the title of second best at $5,320. 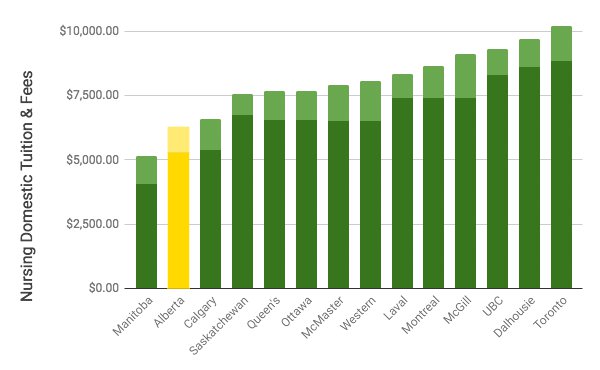 Nursing students at Toronto must shell out the cost of a new vehicle each year for tuition, at $19,120 each year. Manitoba (as always) comes in low at $4,446. Alberta is the second cheapest in the country at $5,320. 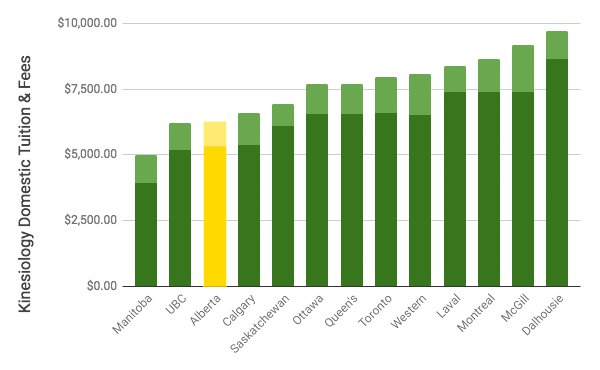 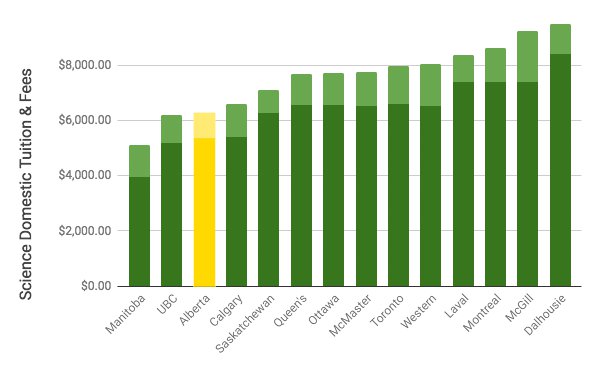 Many students have merged Arts and Science together, and even if they do not, frequently charge similar rates for both faculties. Manitoba’s students are the luckiest at $3,945, while Dalhousie is again the most expensive at $8,415. Once again, Alberta comes in at second best at $5,320.

U of A mulls cuts of 9% over three years

On October 24, the University of Alberta announced that its deans and administrative units would move forward with budget planning assuming potential cuts of up to 9 per cent over the next three ye...

New research conducted by the Students’ Union (SU) seeks to understand how identity effects students running in undergraduate politics at all levels. This study is the first of its kind in Canada a...